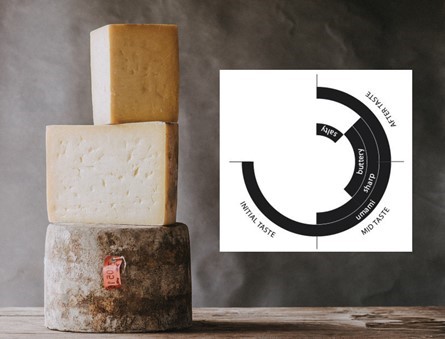 Devon-based clothbound cheddar producer, Quicke’s has launched a new framework to enhance the world’s appreciation of cheese. Responding to a growing interest in artisan and farmstead cheese, the Flavour Mapping Project has been undertaken to chart the full tasting journey, from Initial Taste to Mid Taste to After Taste, providing a simple tool for cheese lovers to immerse themselves even more deeply into the eating experience.

Having now mapped the tasting notes of its full range of clothbound cheeses, Quicke’s hopes to shine a spotlight on the big differences between artisan cheddar and mass-produced block cheddar. Going above and beyond the reductive 1-5 strength rating that is so often associated with Britain’s favourite cheese, the story of the pastures and the seasons at Home Farm is perfectly encapsulated within the Quicke’s Cheddar Tasting Box, with all wedges now coming with their own flavour map.

Explains Mary Quicke MBE: “The Flavour Mapping Project has been a labour of love, originating from countless conversations on the farm, as we’ve graded our cheese. Just as the cheese tastes different as you make your way from the rind to the centre of a clothbound truckle, there’s a multi-layered story to tell on the palate too. Building upon the work of organisations such as the Academy of Cheese, which is achieving great things with its structured approach to tasting, we hope that our flavour maps can help illuminate a new dimension of cheese for all those curd nerds out there. Cheddar is a fantastic place to start with this project, as I think many will be surprised at the diversity that is being produced from our little corner of Devon, but we really hope other cheesemakers will use the framework too. There’s a whole world of taste, texture and terroir to explore and a map is an essential tool for any journey!”  For more visit quickes.co.uk